While we were instigating the noise of the problematic BS SF(=F1) LVDT, we found a strange noise peak in the signal.
As you can see in the following video, a noise peak around 10Hz randomly moves around, say, between 8Hz and 30Hz.

Note that the video was sped up by 2.5 times.
The GAS filters were in a free-swinging state during the measurement.
We first suspected this may come from acoustic noises since the chamber is open. However, the fact that this peak only appears in the F1 LVDT makes this hypothesis less convincing.

You can also see that the noise level of the F1 LVDT is about 100 times larger than the other stages.
As Fabian explained in klog18953, we inserted a conversion circuit to swap the roles of the first and secondary coils. The circuit also converts the differential excitation into single-ended.
After this, the noise level of the F1 LVDT dropped to the same level as the other LVDTs (I forgot to save the data to show this). We also took the F1 GAS TF to see that the signal level was reduced only by a factor of 2-3 from the reference. This suggests that we have improved the signal-to-noise ratio by a factor of 30 to 50, which is good.
However, the wandering peak was still observed after the modification. The relative height of the peak to the noise floor remains the same, roughly 3 to 4 times larger than the floor.

Currently, a suspect is the voltage fluctuation of the vacuum chamber because we know that one end of the primary coil is connected to the chamber.
We should take a correlation between the vacuum chamber voltage and the SF LVDT signal.

The picture of the installed circuit is this. This is a bad way of installing a circuit. People should not imitate us. 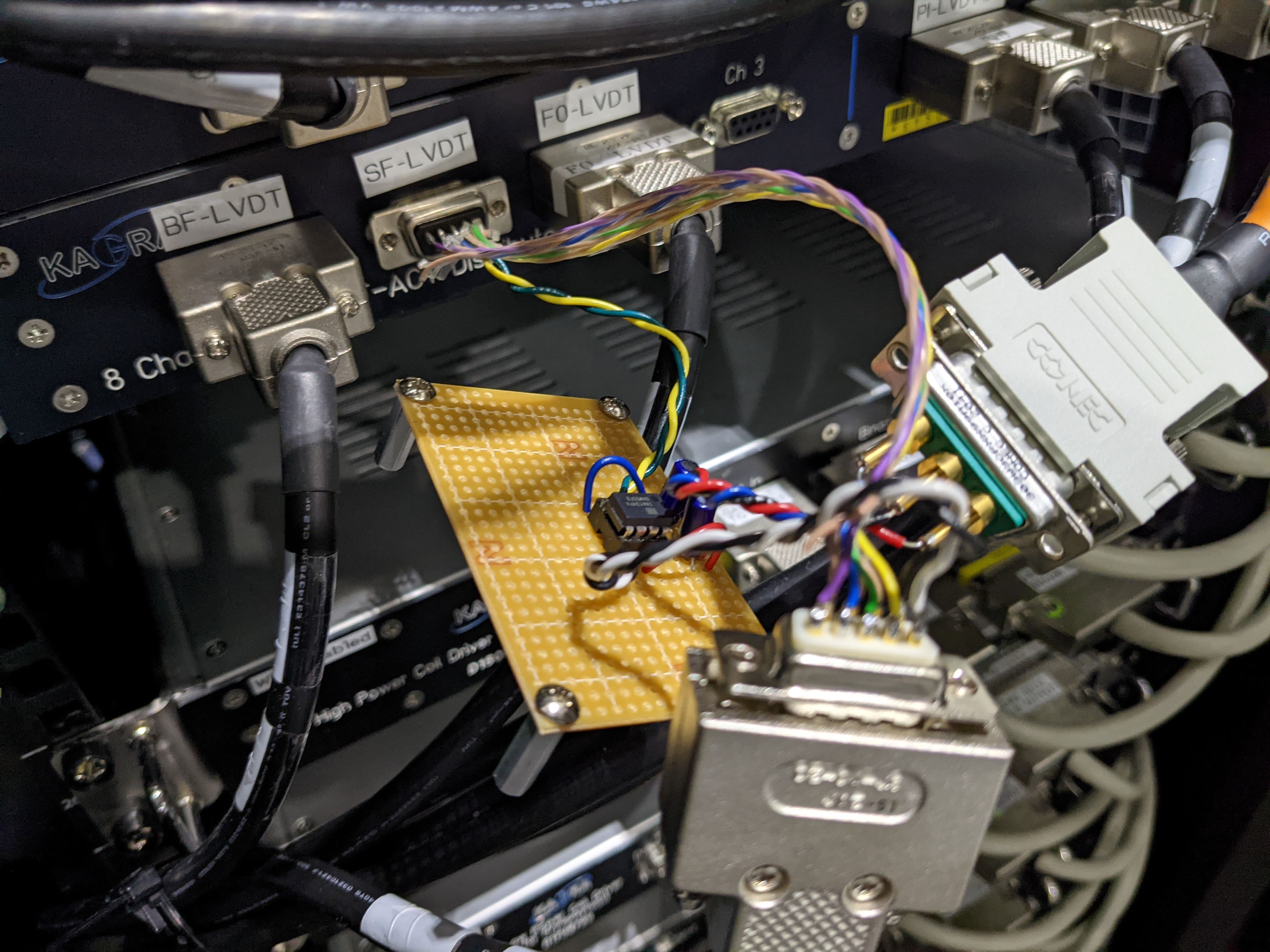 We removed the circuit after the test. We asked Hirata-san to make appropriate holes on an aluminum box to put the circuit in the box.

The schematic of the circuit can be found here: https://gwdoc.icrr.u-tokyo.ac.jp/cgi-bin/private/DocDB/ShowDocument?docid=13455

I tried to gather more information about the wandering peak in the F1 LVDT readout. However, I couldn't find much more than what it's been reported already

The screenshot shows the amplitude spectral density (ASD) in linear scale of the free swing readout of the three GAS filter LVDTs. The plot in blue corresponds to the F1 LVDT. In this screenshot, the wandering peak is at 20 Hz. During a couple of hours, the peak moved between 6 and 46 Hz (indicated by the blue vertical lines). It did not move in an uniform way, but erratically. Besides the wandering peak, there is a fixed peak at 33.5 Hz that appears and dissapears, maybe by hours at the time.

I measured the ASDs of all the other GAS filter LVDTs in Type-B suspensions, but none of them showed a wandering peak. The feature that distinguishes the F1 LVDT is a stray connection to the chamber. As suggested by Aso-san (entry 18964), we could measure the voltage of the chamber with respect to ground and search for a correlation. Another strategy would be to connect the chamber directly to electrical ground (as we have assumed it is) and see whether the noise dissapears. The second option seems easier.

Summary: connecting the chamber to the ground did not have any apparent effect on the wandering peak.

We connected the vacuum chamber to the ground using a power cable connected to the rack. See pictures for details.

Before connecting the ground pin directly to the chamber, I used a multimeter to measure the voltage difference to be 17 mV rms.

After connecting the cable to the rack, I measured the amplitude spectral density of F1 LVDT. The wandering noise was still there. See the last screenshot. Connecting the chamber to the ground did not have any apparent effect on the wandering peak.